WHEN BLOOD DOES NOT DRY FAST. VIOLENT DEATHS AS PUBLIC EVENTS 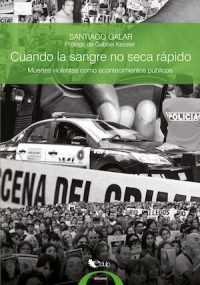 WHEN BLOOD DOES NOT DRY FAST. VIOLENT DEATHS AS PUBLIC EVENTS

"When blood does not dry fast" analyze murders produced in Argentina during the last decade, a period in which the criminal situation was installed as a priority of social concern. The author reconstructs in detail the processes by which the dead bodies of the victims stopped referring to those who were people, to become a set of social relationships with renewed meaning. It’s focused on recreating the public actions of the actors by which these violent deaths were transformed into shocking cases and enabled crisis contexts. These processes are approached from the local perspective of provincial capitals context. Based on this particular point of view, the author explores the diversity that underlies insecurity, understood as a phenomenon usually defined (and analyzed) in national terms.