Where does surplus go? The nineties in a subnational area 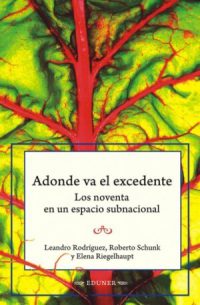 Where does surplus go? The nineties in a subnational area

The convertibility regime in the 1990s finished with an unprecedented crisis that resulted in severe social, political and economic decline, particularly intense in Entre Ríos, Argentina. Neither was it a natural and inevitable phenomenon, nor the lack of competitive capacity of the province’s economy. Contrary, the province was the scene of an increase in productivity, there was also a process of accumulation and improvement of the population’s living conditions. The economy developed the necessary resources to maintain development. In this book, the authors explain this contradictory process by appealing to category which is not usually applied by conventional knowledge: the economic surplus. Through an analytical model and interviews to well-known entrepreneurs, they operationalize and apply the concept of social surplus to the subnational area. In this way, they show that the debacle resulting from the stage examined lies in the logics of surplus management, especially in the dynamics of appropriation and destination.